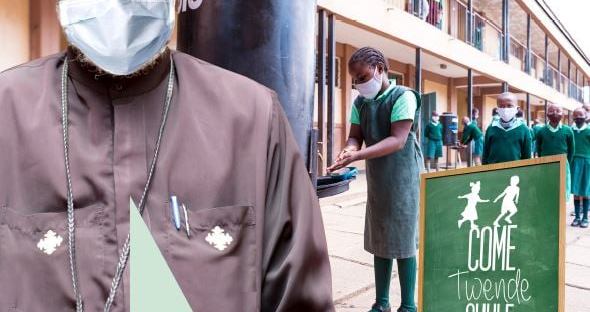 January 4th 2021 was the day that the president had directed all parents to take back their children to school. Prior to that, the schools had been closed since March 2020, and the COVID-19 pandemic had immensely affected many families across the Country. When the president announced that children should go back to school many parents across the country were hesitant and rightly so because they had witnessed the catastrophic effects of the pandemic. Many parents were scared about the safety of their children when they went back to the school setting, they were worried that children will not be able to effectively follow the guidelines and protocols thus their lives would be endangered. But if there is anything that the pandemic proved is that children are better off in school than at home; issues like child labour, violence on children, teen pregnancies, moral decay, depression and mental health were just a few of the issues that affected children as they stayed at home.

Victoria’s mother struggled to get fees that would enable her daughter to go back to school with no success. Thus was forced to keep her child at home.”

Religious leaders have been mandated not only to address the spiritual well-being of the people but the overall well-being of their congregants. Different cases arose across the country; Victoria was among the cases that were highlighted by Religious leaders. Victoria who is a form two student at Halftax Secondary school in Kongowea, Mombasa County was among such cases. Victoria is a daughter of a single mother who like many other people in the country have been struggling to make ends meet due to the effects of the coronavirus pandemic. Victoria’s mother struggled to get fees that would enable her daughter to go back to school with no success. Thus was forced to keep her child at home. With the pandemic and the lack of enough school fees Victoria’s mum just like many parents who had been affected economically by the pandemic were ready to hide behind the fear of the safety of their children in schools because it was an easier path to follow than taking their children back to school.

This is not the only unique case, there are many such cases in the Country; Mohamed is a high school student in Isiolo County and was able to go back to school. He had ventured into a boda boda business and had resolved not to go back to school since he was already making money which he was using for his own pleasure. At Mishomoroni area still in Mombasa County, we find Hillary who is a PP2 pupil at Junda academy. He is also being raised by a single casual labourer mother at Kongowea market and just like Victoria’s mum the pandemic saw her lose her source of livelihood just like the many businesses which closed down leading to loss of livelihood for many families. She also like many others wasn’t able to take Hillary back to school due to fear and financial constraints. Research shows that the more that children stayed at home the higher the probability that they would never go back to school especially the less privileged. This was the message Hillary’s mother heard and just like Victoria’s mum and Mohamed are glad they took the advice of Religious Leaders and grateful for the confidence drawn from the messages.  For now, Victoria is a happy child because the church adopted her and pledged to pay for her school fees through her high school education. Mohamed is back to school and looking forward to becoming an entrepreneur after the completion of his education. In Hilary’s case, Religious leaders intervened and she was able to take her child to school and was even provided for capital to start her hawking business.

These are just a few cases of the impact of the messages done by Religious Leaders. These messages played a key role in pushing Mohamed, Victoria’s and Hillary’s mothers to take an extra step in Mohamed going back and the mothers taking their children back to school.

For now, Victoria is a happy child because the church adopted her and pledged to pay for her school fees through her high school education. Mohamed is back to school and looking forward to becoming an entrepreneur after completion of his education.”

Religious leaders in a very impactful way continue to reach out to families that are hesitant in taking their children back to school due to various reasons including fear of their safety as well as financial constraints. They understand that it is important that children resume their education; for schools are a vital safety net for the most vulnerable children for being at home they face increased risks of violence, child labour, moral decay and child marriage. Religious leaders through the messages also reached out and implored key stakeholders, to play their role in ensuring that schools are safe for children.

.@irck_info Religious Leaders continue to undertake the responsibility to transform the behaviour of people by highlighting nature elements mentioned in scriptures, hinged on values to change attitudes to influence action related to natural solutions. #WorldEnvironmentDay

.@irck_info Religious Leaders call upon religious communities, from the grassroots to the most senior leadership, to join up to protect forests and all surface waters including all Kenya waters. #WorldEnvironmentDay #GenerationRestoration

.@irck_info Religious leaders envision a world transformed, in which humanity in all its diversity has developed shared reverence for life on Earth. Together, we are building resilient, caring communities & economies that protect the natural ecosystems. #WorldEnvironmentDay

Originally tweeted by Inter-Religious Council of Kenya(IRCK) (@irck_info) on June 5, 2021.

View all posts by irckinfo